Ronnie Govender a recipient of two lifetime achievement awards for his contribution to literature and the arts was born in 1934 in Cato Manor. His lover for theatre was motivated by oral storytelling by his mother and grandmother. Andre Huguenet’s performance in Oedipus Rex also made him realise his dream of being involved in theatre. He studied at Springfield Teachers Training College and worked as a teacher, a part time journalist for The Leader and later wrote for Congress of South African Writers (COSAW).

His plays and collection of stories reflects his passion about his community. At the edge and other Cato Manor Stories received a Common Wealth Writers Prize. While still a teacher Ronnie wrote and directed his first play Beyong Cavalry. In his fight against bourgeois and dominantly white theatre, he formed a Shah Theatre Academy with his late cousin Kessie Governder. Despite all the challenges like lack of funds, the academy was able to train and encourage local authors to become involves in theatre. The Lahnee’s pleasure and At the edge both received critical and commercial acclaim around the world. In 2008, he was awarded the Order of Ikhamanga from the State President of South Africa for his “excellent contribution to democracy, peace and justice through the medium of theatre”.
http://scnc.ukzn.ac.za/doc/b/gs/biography_gos/govender_ronnie.pdf 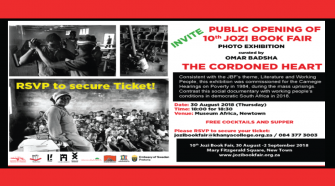 Invite to The Cordoned Heart: Photo Exhibition by Omar Badsha