James David Matthews was born to working-class parents in District Six, Cape Town, on 29 May 1929. He attended Prestwich Primary School and then went on to Trafalgar High School in Cape Town. He has said:

“I grew up in a household where there were no shelves filled with books. My father was illiterate and my mother read Oracle and Miracle, two thin paperbacks from the United Kingdom which could hardly be considered as literature….

I was almost 14 and in standard eight (grade 10) when we were asked to write a composition. It is now termed creative writing. I will never forget the name of our English teacher – Miss Meredith. She announced to the class that I had written a short story and not a composition. She marked it 21, one mark above the accepted 20 and informed the class that I was a writer. 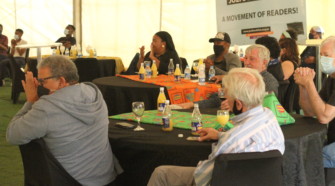