Shailja Patel was born in Kenya to parents of Asian origin. She attended school in Kenya and Britain. Later she also went to university in Britian. The expulsion of people of Asian origin from Uganda in 1972, many of them citizens, has influenced her life and her work, Migritude.

The CNN calls Shailja Patel “the people-centered face of globalization”. Her publishing debut, Migritude, based on her acclaimed, internationally touring one-woman show, was a #1 Amazon poetry bestseller, a Seattle Times bestseller, and was shortlisted for Italy’s Camaiore Prize. Migritude is taught in over 80 colleges and universities worldwide. Patel’s poems have been translated into 17 languages. Her essays appear in Le Monde Diplomatique, The New Inquiry, Internazionale and Counterpunch among others. She has appeared on BBC, Al-Jazeera, and NPR. Honors include a Sundance Theatre Fellowship, a Voices of Our Nations poetry award, the Fanny-Ann Eddy Poetry Award, and the Nordic Africa Institute African Writer Fellowship. Her performances have received standing ovations on four continents.
Patel is a founding member of Kenyans For Peace, Truth and Justice, a civil society coalition which works for an equitable democracy in Kenya. The African Women’s Development Fund named her one of Fifty Inspirational African Feminists, ELLE India Magazine selected her as one of its 25 New Guard Influencers, and Poetry Africa honored her as Letters To Dennis Poet, continuing the legacy of renowned anti-apartheid activist poet Dennis Brutus. She represented Kenya at the London Cultural Olympiad’s Poetry Parnassus. Her work currently features in the Smithsonian Museum’s groundbreaking “Beyond Bollywood” exhibition. www.shailja.com

To get a preview of Shailja Patel’s Performance: http://youtu.be/3aTpS4gjDsscd

S-shaped curved. The first was Shruti – the child they told

me I would never have. Shruti means “divine revelation”

And she was. Our gift from Mataji.

Then Shailja. Named for Parvati, the flowering of stone

in temples, the cave paintings of the goddess in Sri

Lanka. No wonder she became an artist.

You never forget the pain of childbirth. It’s something

no one can imagine. Your heart is never whole again

once you have a daughter.

I never wanted daughters. Women are never safe. My

daughters make me so angry! They keep seeking out

danger. After everything we’ve done for their security,

they reject us. They choose the hardest, worst, most

Next GETTING READY FOR WINTER SCHOOL 2018

Fiction, Memory & Justice: Futhi Ntshingila’s They Got To You Too! 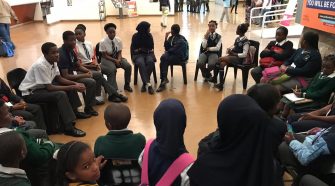